By Katherine Miles on July 22, 2015 in The Ruby Slipper Story 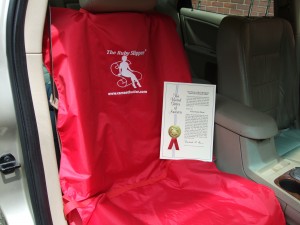 Now that I have an actual slipper I need to start finding an attorney that can file a patent for my product. I started by calling an attorney I had used and asked for a referral. I was given a name and I called the attorney. He sent me a list of attorneys in the Baltimore area that do patent work.

I first began by looking at their webpages. I used some information from the webpages to ask questions when I called the firm. Most would tell me the process and that if I was interested I could make an appointment.

I still wasn’t sure who I wanted to use. I called one attorney and I asked if he did patents and he said he did but that he wasn’t taking on new clients. He did however tell me that he had the perfect person for me. The attorney he referred me to was Roy Craig.

I called and spoke to Roy. He was very interested in my product and wanted to take a look at it. I made an appointment. I took the product in and Roy was impressed and said that it was worth doing a patent search.

There are three parts to the patent process: the search, pending patent, and finally the patent.

The patent search showed that in order to get protection on my product I needed to make some changes. I spent some time reviewing what I had originally done and how I could make some changes and still have my product. I made several versions until I came up with one I really liked. I called and made an appointment with Roy. He said I had made enough changes that we could go for the pending patent. After the paperwork was done I was able to put pending patent on the brochures and product. A pending patent goes for one year before you have to file for the actual patent. During that time changes can be made to the product if needed.

When the year was up I decided we would go for the patent. The attorneys in the group wrote the specifics of the Ruby slipper. I had to review them and see if any changes needed to be made. I took a couple of calls back and forth before we were ready to file. During the time that I was waiting to hear from the patent office I kept pending patent on all my slippers and brochures. Then one day I received a large envelope in the mail. I was so excited when I opened up the envelope to discover that I had received the patent.

Now on to marketing.