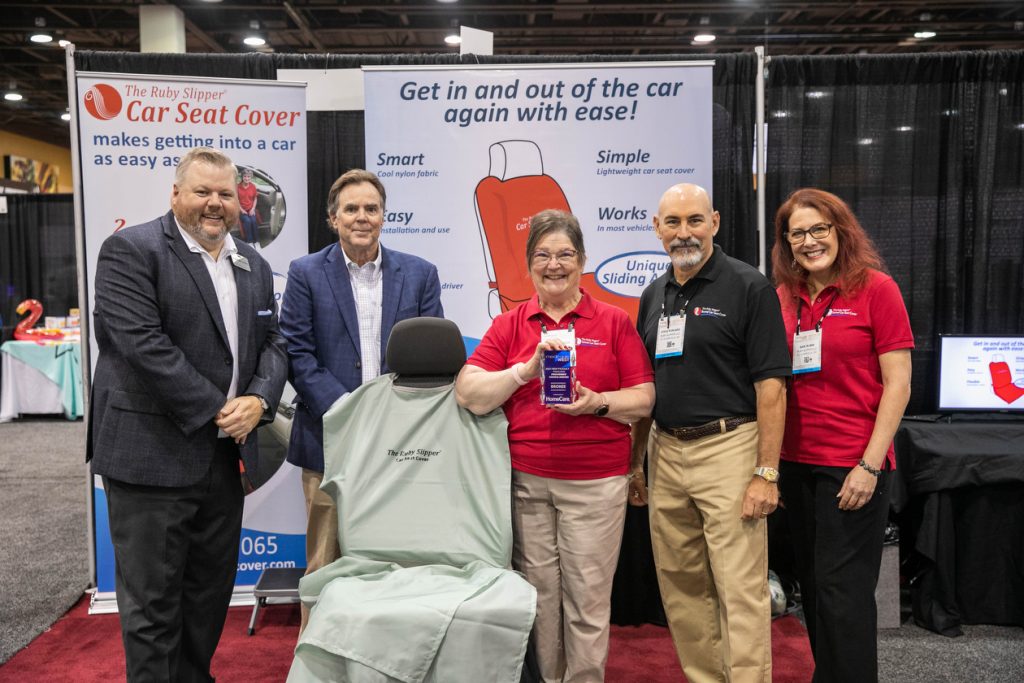 Why did the device do so well? Medtrade Monday sat down with Steve Porcaro, director of Business Development for Ruby Slipper, LLC., St. Clairsville, Ohio, to learn more about the product and its development.

Medtrade Monday: How well did people understand the product at Medtrade West?
Steve Porcaro, director of Business Development, Ruby Slipper, LLC.: For a little while, people thought we were selling a car seat cover, not realizing that it swiveled and helped people get in and out of the car. Because it was relatively low tech and did not have a lot of moving parts—no lights and switches—people would walk by the booth a couple of times and see the chair and not really be sure what it was.

Medtrade Monday: How important was the in-person demonstration?
Porcaro: Once we put someone in there and demonstrated how easy it was to slide, whether you were helping yourself or you had a caregiver assist you getting in and out of the car, they saw how easily it swiveled and how comfortable it was. When that happened, all of the sudden we would get a group of people standing around the booth watching. We would have people jump in the seat and feel it for themselves.

People would look at it, read the information, and watch the video, but once they sat down and felt it on their bottom, you could see the light bulb go off in their head. It was amazing. People in the mobility space would walk by and immediately recognize the value. Other people in other specialties would see it and it would be interesting to them, and once we demonstrated it, 99% of the people were impressed and enjoyed it. A number of people said, ‘I could use this with my parents.’ Everyone knows someone who needs help getting in and out of the car. All in all we had a great experience at Medtrade West and a very positive feedback. It was very well received.

Medtrade Monday: What are the company’s origins?
Porcaro: Founder Katherine Miles invented this product for her mother who had difficulty getting in and out of the car. At the time, the standard of care was to use a plastic trash bag. The trash bag was hot in the summer and got sticky and over time you can only use it a handful of times before it broke or disintegrated.

Katherine had a background in sewing and quilt making and she took those skills to devise prototypes to create this seat cover that would fit over the seat that was easy to use, comfortable, and would allow her mother to slip and slide. Unfortunately her mother passed away before the product was patented. Her mother, however, was there during the development of the prototype. Katherine’s mother’s name was Ruby, hence the name Ruby Slipper Car Seat Cover.

Medtrade Monday: Had you exhibited at Medtrade West before?
Porcaro: This was our first time exhibiting at Medtrade. Katherine was taking this to senior fairs and health care-related fairs in the greater Baltimore area for a couple of years. As the product started to get picked up, we were keeping our eyes and ears open to figure out the best way to introduce this product.

Medtrade West: Why did you decide to exhibit?
Porcaro: We attended the ABILITIES Expo in New jersey and other shows. We went to occupational therapy and physical therapy shows. We were trying to connect with clinicians. We didn’t know what we didn’t know. As we started going to these shows and started asking around, Medtrade kept coming up and people said that would be a great show for us. Medtrade was on our radar last year and then COVID came in. We had a half dozen trade shows that were canceled. Medtrade West was our first show back and we are going to Atlanta for the Oct. 18-20 Medtrade East at the Georgia World Congress Center. We’re very excited about that.

Medtrade West: Why do you think you earned so many votes and won the bronze?
Porcaro: It’s such a simple and convenient device that it is really for the everyday person. In some ways, when people ask who it’s designed for; it’s made for a wide range of people, whether they are recovering from surgery, having some chronic health condition, or maybe they are a little bit older. On one hand, nearly everyone drives and people are picking up their parents or aunts and uncles. They look at this and say, ‘What a simple design.’

It’s one of these great inventions where you look and ask, ‘Why didn’t I think of that?’ It’s the simplicity of it, the relative low-tech approach. You don’t have to recharge it, there’s no Wi-Fi, it’s comfortable, it’s lightweight, easy, and very affordable. Some of our testimonials from customers over the years attest to how it’s a device that gives them their freedom back and their mobility, allowing them to lead a more normal life. That’s the big connection for most people, and that’s probably why we had the positive response from Providers’ Choice voters at Medtrade West.

Nature Can Improve Mental Health During the Pandemic, Study Finds